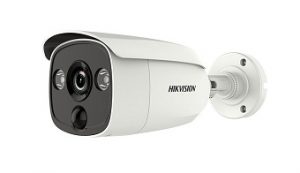 Hikvision has launched a new addition to its Turbo HD 4.0 analogue range with PIR technology to give it even more accurate detection. The PIR (Passive Infra-Red) sensor, which has a detection range of 11 metres, senses movement in an area. It has been added to four models (DS-2CExxD8T-PIR(L) series), so it is available in three form factors – bullet, dome and cube.

The sensor can filter out false alarms by differentiating between the infrared emissions of a human being from the other ‘noise’. So, when an inanimate object moves, there’s no alarm, but when it senses human body movement, an alarm is triggered. In the meantime, the camera generates flashing white light as a warning signal to deter the intruder, while it also provides supplemental light, allowing the camera to capture clearer image of the target in harsh environment. Filtering out false alarms saves on storage space and also means more efficient searching post-event, as there are fewer alarms to look through.

The cameras are also equipped with ultra low-light technology, so they can produce clear, high quality images even in low-light scenarios – down to 0.005 lux. These cameras are really useful in applications where cost is a relevant factor, like for private residences and outside smaller retail outlets.